SHANGHAI — Some 200 members of the Chinese Communist Party’s Central Committee, the country’s top policy-setting body, are gathering in Beijing for the party’s fifth plenary session. The country’s leaders will use the four-day, closed-door meeting that starts Monday to discuss long-term economic and social development strategies.

At the center of the talks will be China’s 14th five-year economic plan and the country’s goal to become the global leader in technological innovation and other areas by 2035. But the plenum comes amid a slowdown in growth, aggravated by the COVID-19 pandemic and escalating tensions with the U.S.

The 2021-2025 blueprint will mark the first set of policies aimed at realizing President Xi Jinping’s target of becoming a “great modern socialist country” over the next 15 years. The final plan is expected to be approved by the rubber-stamp legislature, the National People’s Congress, next year.

Officials have been talking in recent weeks about the “dual circulation” development concept, initiated by Xi in May, which they say will be the centerpiece of the five-year plan.

The strategy calls for “domestic circulation” to stimulate local demand, as China’s trading partners continue to struggle to tame the pandemic, and integrating that with “external circulation” — using market reforms to promote international cooperation.

“We believe China will continue its economic rebalancing toward more consumption-led, higher value-added, green and sustainable growth,” UBS said in an Oct. 16 report.

The Swiss investment bank forecasts China’s annual gross domestic product growth at between 5% and 5.5% during the five-year period, and forecasts GDP per capita to rise to about $15,000 by 2025, up from the current $10,500. UBS said China will deploy measures to boost technology and consumption to avoid the “middle-income trap” — in which a developing country grows rapidly for a time but then fails to catch up to developed economies. 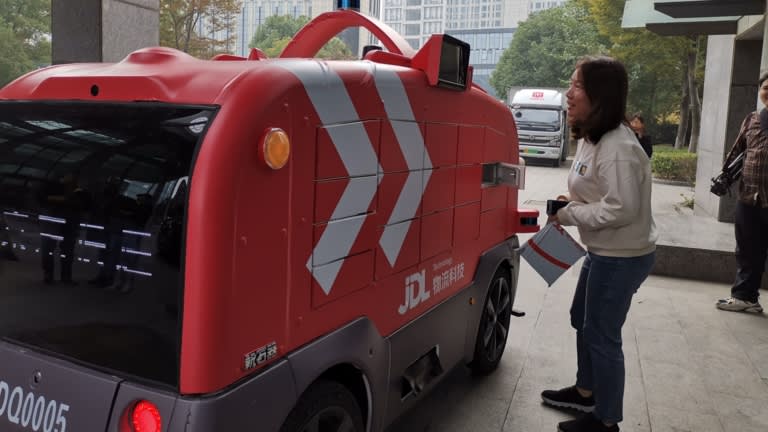 A woman retrieves a parcel delivered to her by a JD.com autonomous vehicle in Changshu, China on Oct. 22. (Photo by CK Tan)

Xi said on Thursday that the major economic and social targets set out under the current five-year plan will be achieved by the end of the year, according to Xinhua, China’s state-run news agency. UBS said that while some goals would be met, those for GDP growth and household income would fall short due to the pandemic.

Economists at Morgan Stanley said China may not set growth targets for the upcoming plan, as the party switches its focus to the quality of growth. Instead, they expect the country to focus on boosting self sufficiency in key industries as it faces longer-term structural challenges amid geopolitical tensions, demographic headwinds and a global slowdown.

The party may lend further support to homegrown proprietary technologies.

Qi Kong, chief scientist and head of automation at JD Logistics, is leading a project for JD.com, one of China’s largest e-commerce players, which uses autonomous vehicles controlled by ultrafast 5G data communications and cloud computing.

“We plan to deploy up to 100 units by the end of the year, mainly in Changshu City,” Qi told Nikkei Asia in a recent interview.

The project has been running since February with about 15 vehicles on public roads in five cities, rather than in fenced-off areas, delivering parcels to homes and offices. Qi claims that JD.com is the first company in China to use such technology to deliver goods, while acknowledging that others have put robotaxis on public roads.

Changshu, in eastern China, is one city earmarked for smart city pilot programs that experiment with 5G-powered concepts in sectors including autos, health care, retail and manufacturing.

Such projects will be part of the urbanization drive to spur productivity in the five-year plan, which also includes labor and land reforms aimed at reducing disparities between rural areas and cities. Among other initiatives are goals to reduce carbon emissions and market reforms to promote foreign investment.

“Overall, how China can achieve sustainable, balanced and high-quality growth in coming years, and enter the high-income group from the upper middle-income group currently, is the key long-term question for policymakers,” Goldman Sachs said in a report last week.