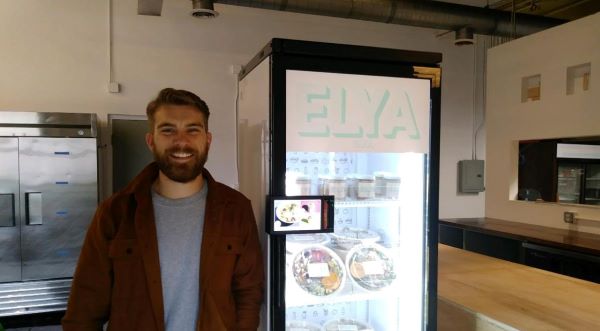 ELYA, a food service company launched by Danny Sterling, is trying to appeal to large employers like schools and hospitals with its line of organic, non-GMO meals served from a refrigerated vending machine. (Photo by Jack Jacobs)

Danny Sterling is getting into the vending machine business, but chips and candy will not be his bread and butter.

His new Manchester-based startup, ELYA, short for Eat Like Your Ancestors, is a bid to bring a line of quick-serve healthy entrees into workplaces like offices, hospitals and universities.

Lunch bowls, snacks and breakfast items made by Sterling will be made available via reach-in, glass door refrigerators that feature credit card swipes for payment.

“You swipe a card and pull out the food item you want,” he said.

Lunch bowls will be priced at around $13 each. Snacks and breakfast items will run about $5 to $7. ELYA’s menu isn’t tied to any one style of cuisine, with Korean, European and Southern flavors making appearances.

Sterling is currently in talks with a co-working space and another business to pilot a test-run of his in-house service model. He hopes to pin down a healthcare facility and an apartment complex to round out the pilot. His plan is to initially increase the machine count to 10 units. Currently, he has two units.

To kick things off, ELYA opened a contactless cafe at its kitchen space at 7 E. Third St. in Manchester on Oct. 26. The cafe is one part takeout restaurant and one part test lab, where Sterling can show off the concept to potential clients. The cafe is a take-out joint without indoor seating.

The contactless cafe is a coronavirus pandemic pivot for a concept that originally was slated to launch this spring. Sterling hit pause due to the pandemic. The company’s focus will be on large professional clients looking to introduce a new food option for workers.

The mainstay of the company’s business is expected to be through sales generated by purchases from its refrigerator units set up at clients’ facilities, though Sterling expects to expand the concept to include food deliveries to smaller companies. He said much of the company’s resources will be tied up in purchasing organic and non-GMO ingredients, so he hopes to keep other expenses down to offset food costs.

“I hope to create a culture where we cross train employees,” he said. “Where we take a hit on food costs … we try to reduce costs in overhead and staffing.”

ELYA has taken over a portion of the space formerly occupied by Plant Zero Cafe, which shuttered earlier this year. Sterling is self-funding the venture and he didn’t share how much he has put into it thus far.

Sterling has been a chef for 15 years and moved to Richmond last year. The ELYA concept developed over the course of several years, starting with a drink with a coworker after a shift at 42 Grams, a now-closed fine dining restaurant in Chicago, in 2015.

“I realized that the food I was serving wasn’t accessible to most people,” he said.

Sterling was diagnosed with cancer and spent time in the hospital the following year, which brought him in contact with food that he felt left something to be desired. The two experiences pushed him away from fine dining toward a desire to pair his training with a more approachable setting.

In addition to his time in Chicago, Sterling also ran the kitchen in a Florida country club’s restaurant. More recently Sterling co-founded Leesburg restaurant Roots 657 Cafe and Grill, and did restaurant consulting in Northern Virginia.

ELYA is one of several new food concepts to come to Richmond in recent months.

A Jefferson Hotel chef has launched a ghost kitchen called Field to Fire out of Hatch Kitchen, which itself is expanding the local food scene with the area’s first food hall. A former chef for Phish recently unveiled a frozen burrito delivery company.

U.S. Surpasses Record For Coronavirus Deaths In A Single Day

U.S. Surpasses Record For Coronavirus Deaths In A Single Day